Who is Saint Spyridon?

Saint Spyridon was born in the 3rd century. He was a family man and shepherd on Cyprus. He was well known for his faith in God, love of man, his simplicity, his humility, his hospitality and his good deeds.

After the death of his wife, Spyridon dedicated his entire life to God and caught the attention of the faithful on mainland Greece. When the bishop of Trimithountos, near Salamis, died, they unanimously elected Spyridon as his successor.

Despite his new position, Spyridon remained humble. He carried on with his lifestyle and wore the same clothes and the same hat made with braided palm leaves. He walked everywhere, helping locals with their farming and tending his flock. During a night-time attempt to steal his sheep, the robbers succumbed to an invisible force that immobilised them as they try to escape with the sheep. In the morning, Spyridon found them. Embarrassed, they admitted what they had done and what had happened to them. Spyridon freed them from the invisible force, admonished them and gave them two rams, “for the effort of vigilance” as he told them.

When drought hit Cyprus, the saint with his prayers brought rain. Some people were trying to take advantage of the situation and had stored large quantities of wheat to sell them at an inflated price. The prayers of the saint demolished their barns. He then distributed the wheat among the people. Always ready to help people in need, the saint went to free a man who was facing a death sentence. On his journey, Spyridon came across a fast-flowing river that he could not cross. . The saint commanded the water: “Halt! For the Lord of all the world commands that you permit me to cross so that a man may be saved.” The river stopped, allowing to cross without getting his feet wet. The judge, apprised of the miracle that had occurred, received Saint Spyridon with esteem and set his friend free.

A woman sought his help and requested that he resurrect her child, who was lying lifeless in her arms. The saint prayed, and the infant was restored to life. The mother, overcome with joy, collapsed. Through the prayers of the saint, the mother was also restored to life.

Similar instances from the life of the saint are also known. Once, he went into an empty church and ordered that the lamps and candles be lit, and then he began the service. When he said, “Peace be unto all”. In response, both he and the deacon heard from above, the resounding of a great multitude of voices saying “And with thy spirit”.

Saint Spyridon died in Trymithous, where he was buried, in 348 A.D. When the Saracens invaded Cyprus in 648 A.D, his body was exhumed and taken to Constantinople, Byzantium for burial. On exhumation, the body, although having been buried for three hundred years, was well preserved, and gave out a distinct aroma of basil, the king of herbs, both considered signs of Saints or “Incorruptibles”

In 1453 Constantinople fell to the Ottomans, and again, Saint Spyridon’s body was exhumed and taken first to Serbia, and then to Corfu, where the relics have remained and can still be seen to this day.

It is believed that when the dreaded plague hit Corfu in 1629, starting in the villages, and quickly spreading to the town. The Corfiots gathered together at the church of Saint Spyridon and prayed to him for salvation. Some days before Easter many of the sick had visions of Saint Spyridon healing them, and for three nights strange lights were seen in the bell tower of Saint Spyridon Church, by Palm Sunday the plague had vanished.

In 1553 Corfu suffered a terrible famine, and just as everyone thought this was the end, and that they would all die of starvation, out of nowhere, a ship, filled to the gunnels with wheat dropped anchor at the island. The captain reported he had seen Saint Spyridon calling to him in a dream, begging him to stop at Corfu as they were in fear of dying of starvation.

When the Turks invaded the island in 1716, at the second great siege of Corfu, Turkish soldiers were said to have been so terrified by the sight of Saint Spyridon, again, dressed as a monk, flying at them, threatening them with a flaming sword, that they fled in a panic, and the siege, which had lasted for twenty-two days was over, Corfu was saved.

In 1673 the plague hit Corfu for the second time, again the inhabitants of the island, congregated at the church, praying for help from Saint Spyridon. Again mysterious lights were seen in the bell tower, and the image of Saint Spyridon was spotted chasing after the plague (which some say looked like a black ghost, others a winged creature, half-lion, half-monkey), and beating it with a cross, when it reached the fortress of Corfu, he had the plague creature scratch a cross into the stone wall, and vow never to return, abruptly, the plague was no more.

St Spyridon church stands in Corfu’s old town, an iconic church of Corfu which has the highest bell tower in the Ionian Islands. The presence of Saint Spyridon in Corfu for more than 450 years has shaped customs and traditions to the point that Corfu and Agios Spyridon are an inseparable bond, a single identity.

On December 12 the Greek Orthodox Church celebrates the Feast Day of Saint Spyridon. A celebrated day across the whole island, it also the name day for Spyridon, Spyros and Spyridoula. 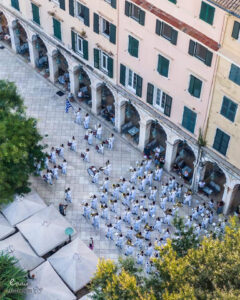 Useful information on movement from Greece to Albania according to current measures to limit COVID-19. (VALID FROM 15/03/2022)

Useful information on movement from Greece to Albania according to current measures to limit COVID-19. (VALID FROM 06/09/2021)

Useful information on movement from Greece to Albania according to current measures to limit COVID-19 Actions before travel from Saranda Port (Albania) to Corfu Port (Greece) Issuance of PLF (Passenger Locator Form) from the official website of the Ministry (https://travel.gov.gr/#/) at least 2…